Kamayani Bali Mahabal meets three sisters who took their interest in the weaver-poet, Kabir, to a new level.

So just what is common between three sisters from South India: Archana Sundararajan, a classical dancer from Madurai; Bindhumalini Narayanaswamy, a graphic designer from Bangalore, and Jaya Madhavan, a writer from Chennai? The poet, Kabir. 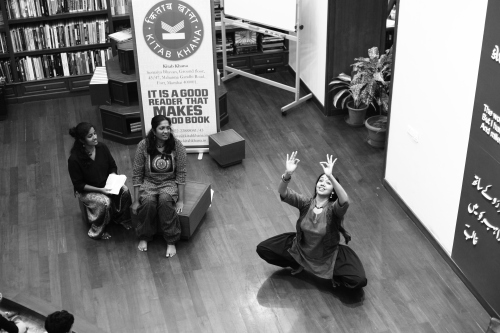 During the Kabir Festival held at Prithvi House in Mumbai last month, the trio staged a unique and thought-provoking presentation on the great poet-weaver, entitled ‘Ankath Kahani’, which translates as ‘Unsaid Story’. The Kabir festival is a voluntary effort by people from different walks of life, drawn together by their passion for the poetry of Kabir and the music of folk singers.

The performance of the sisters threaded story, song and dance into a unique “word-sound and movement” dramatisation, punctuated by personal sharing, excerpts from Kabir’s work and dance movements for selected couplets. But the pivot on which ‘Ankath Kahani’ rested was a song which they sang as an impassioned plea to the great weaver-poet, to evoke a sense of Kabir, the sensitive, sensible and spiritual being that is present in all of us.

Archana danced to Kumar Gandharva’s ‘Ud jaaega hans akela…’ even as Bindhumalini’s singing took audiences to a level where being is “just to be there”. The beautiful interpretation of the song, in dance form, mesmerised the 100-plus listeners as they chanted Kabir’s couplets with the sisters. Soon there seemed to be no difference between the performers and the audience — both entities had merged in the bliss of Kabir’s verse.

How did the women choose Kabir? It was Jaya who first took the plunge when she wrote a book on him seven years ago. She says, “Kabir was a fortuitous encounter, a life enhancing one for me.” Describing this journey she reveals that it was Linda Hess’s translations of Kabir’s work that first opened her eyes to the poet. “I was so enraptured by the man’s courage, vision and well — insanity — and the fact that there was so much drama around him, that I decided to record my responses to him as a play.”

She then wrote a short skit with just two characters — a warp and a weft — with her sister Bindhumalini and herself playing the two roles. The play was shot through with Kabir’s couplets, his ideals and anxieties; not as his admirers and protégés saw them but as an outsider who loved Kabir. The warp and weft became many things in the play: Hindu-Muslim, India-Pakistan, Mullah-Pundit — but never was Kabir evoked in his entirety. Looking back Jaya confesses, “I think he still had shades of grey in my mind then.”

At that point Jaya realised that she knew only two things about Kabir: One, that he was a poet, and, two, that he was a weaver. “The poet I seemed to know, the other I didn’t. So I took up weaving classes,” she laughs. That experience changed her view of the poet. As she puts it, “Frankly, it is the loom that showed me a glimpse of Kabir, and taught me creative introspection.

It is the ‘thakli’, the dye, the loom, the warp and the weft, which spoke of the image of the poet for me. I married the weaver and poet as the warp and weft to draw a fuller picture of Kabir. I really believed, like the much loved Tamil poet Thiruvalluvar (also a weaver), Kabir’s ‘dohas’, or couplets, were born out of the material at hand and his vocation. This may be the reason why the loom features so strongly in my book. It is as if it bears witness to his bursts of poetry,” she elaborates.

It was not just Jaya’s work that got influenced by Kabir, her life changed, too. “For a while I even did drastic things like trying to fit all my needs into a small bag and living out of it. I wanted to distinguish between needs and wants. I began reducing my needs, meditating regularly, walking to my destination, and so on. The man does that to you. Unlike other Bhakti poets we know, this man wants to take you along. He wants to share his truths with you,” reveals Jaya.

But how did her sisters get roped in? Says Bindhumalini, who is also a trained singer in Carnatic and Hindustani music, “What attracted me was that Kabir touches every aspect of life. Happiness, bliss, renunciation. He becomes the ultimate being, the guru, the formless one that speaks. And his special poems, called ‘Ulat Bansi’, really made me fall in love with him. He is abstract no doubt, but somewhere something will catch you and the insight hits hard.”

As for Archana, a trained Bharatanatyam dancer with an M.Phil in French, she discovered Kabir through the French language! “That was the catalyst. I got attracted to him when I started translating Jaya’s book into French. Later, I started to dance to Kumar Gandharva’s music on Kabir,” says Archana with a twinkle in her eyes.

Explaining their unique style of presentation — they just sit, read, sing and dance — the sisters say almost in unison, “Kabir, we felt, could be reached only through simplicity and with no pretension. He is someone you cannot claim to know. But we know ourselves and we know how we are impacted by Kabir. The lesser the distractions in the presentation, the better the focus.” In other words, the less the audience looks towards the performers, the more they look inwards so there is nothing visually distracting about the presentation.

What are their favourite Kabir couplets? Archana says, a touch philosophically, “My favourite is ‘Maya Maha Thugni Hum Jaani’ (Maya is the biggest thug, I have come to understand the power of illusion to be a great thug). It perfectly suits my life. Everything is bound in ‘maya’, illusion. I totally believe that.” Jaya finds solace in ‘Dheere dheere re mana/Dheere sab kuch hoi/Mali seenche sau gade/Ritu aaye phal hoye (Slowly, slowly O mind/Everything happens at its own pace/The gardener may water with a hundred buckets/fruit arrives only in its season). “We are leading such fast lives and want everything to happen immediately, but we don’t realise everything has its own time,” says Jaya.

Humming the couplet, Bindhumalini indicates her choice: “Haman hein ishk mastana/Haman ko hoshiyari kya/Rahe aazad yeh jag se/ Haman duniya se yaari kya” (I am bursting with love/ Why do I need to be careful?/Being free in the world). Says she, “This is a beautiful poem in which Kabir talks about the blissful state of absolute love, supreme and unconditional love towards oneself and the world. Here, when everything becomes one, there is no waiting. When the lover is within oneself, why befriend anyone else? And so on. It talks of a happy state and the happiness in this song makes these seemingly difficult concepts or experiences really possible. When we are blissfully happy, don’t we lose ourselves as we merge with the world?”

The sisters now hope to keep sharing Kabir with more and more people. Says Jaya in conclusion, “We have kept our performance simple so that it fits all contexts. It is entirely up to the listeners on how they should interpret it. We are ready and willing to go anywhere. We operate within the spirit of sharing. We have performed in drawing rooms, conference halls, balconies and, well, now Prithvi House, too! It is Kabir and the listeners that matter to us. As long as the sharing continues, the journey will materialise on its own.”