Vanya is a student of History and Politics, Graduate of Oxford University and St Stephen’s College, Delhi. 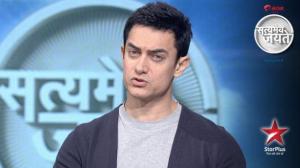 Given that Bollywood and StarPlus soap operas leave an indelible mark on many minds, it is not entirely wrong to believe that were famous ‘stars’ from this “entertainment business” involved in campaigns around relevant social issues – be it gender inequality, domestic violence, religious extremism or caste discrimination – they would be extremely effective in raising awareness among ordinarily apolitical citizens. Our hyper-competitive, sensationalist news media rarely misses any such story; this additional news coverage can spark off debates and help to break the silence around social issues. This could only help in making the socially unaware conscious of them.

This is why it is important that Aamir Khan anchors Satyamev Jayate, and not any social activist ignored by the mainstream media and tabloids. What is brilliant and noble about the show is precisely the fact that it is not social scientists talking to themselves; exchanging esoteric knowledge, using jargon, statistics and abstruse theories. Satyamev Jayate is neither an academic book nor a seminar. It is unique in that it aims to dialogue with ordinary persons who might be unfamiliar with the issues at hand.