Bhupinder Singh is a writer and blogger. He blogs at a reader’s words.

It takes some time for the film to sink in, but when it does, Anhey Ghorey Da Daan (Alms for a Blind Horse) has mastery written all over it.

That Anhey Ghorey belongs to niche contemporary cinema is not insignificant, even more striking is that the film is in Punjabi. This is a dissonance- the film in every way is far removed from what one expects from a Punjabi movie, or even the Hindi movies that Punjabis make.

Isn’t any movie in Punjabi about a Jatt on a revenge spree? Isn’t every Hindi movie with Punjab in the background about lush green fields swaying with bright mustard crops? If not about the big fat Punjabi weddings, isn’t it supposed to be about the valour of militant patriots like Bhagat Singh? 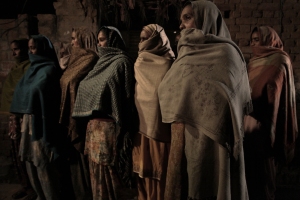 Based on a novel of the same name by Gurdial Singh, Anhey Ghorey presents a contrarian perspective- something that isn’t found in the Bollywoodized versions of Punjab. The story is not about the revenge of the Jatts, it is not about a militant valour either. It is a life that at best is stoic, and at its worst is impassive in the face of hardships. It shows one day in the life of a Mazhabi Sikh family that lives on the fringes. The characters don’t jump into a frenzy of song and dance every few minutes- instead they eek out a  precarious existence against a a volley of brutal attacks on their daily existence.

The title of the story is taken from Hindu mythology that portrayed Dalits as the descendants of the asuras or the demons. When there is a lunar or solar eclipse, the demon Rahu comes on a chariot led by blind horses to settle scores with his enemies- the Sun and Moon gods. . The title itself speaks a lot about the theme of the film. (More about the novel and the myth)

The film starts with the demolition of Dharma’s house by the local landlords who have sold their piece of land, as well as Dharma’s, for setting up a factory. When Dharma and members of his landless Mazhabi Sikh community approach the sarpanch to intervene, they are asked to go to the courts. The sarpanch,  who is evidently a representative of the landholding Jatts uses a combination of guns and mollycoddling to evade the group. Soon, Dharma is arrested and his community is scared off.

The film’s main protagonists are the family of Dharma’s neighbour, whose wife has to beg for a few stalks of mustard from the landlord for whom she works. Finding no support from his own community in the face to the landlords and village sarpanch, her husband decides to leave for the city at the end of the day where his son, Melu is a rickshaw driver. Melu is a hard worker, yet he is unable to make ends meet and provide for his family. His health deteriorates and he is injured during the demonstration earlier in the day. A fellow Mazhabi doctor treats him. Another two of his associates drown themselves in alcohol, while ruminating on their existential condition. Despite being a leader of the town’s rickshaw pullers, Melu is a fatigued and defeated man. Late in the night, he decides to take the train back to the village- even as his father takes the opposite direction. His sister, driven to restlessness, wanders out in the midnight fog. At that point, her brother returns, and they walk back home in silence.

The characters in the family are driven from the village to the town, and from the town to the village, unable to find succour.

Just like its theme, the film’s form and the narrative structure display dissonance. Even though the story is about one day in the life of the family, the way the film is structured brings to mind a jigsaw puzzle. Each character takes one aspect of life in the family- the sequence is not very clear as each episode comes to an abrupt end and then it moves on a to a different one. Most of the characters are played by non- actors and they don’t seem to get or ask for the viewer’s sympathy or understanding. Each episode, however, takes the viewer to experience a slice of their grinding life and underlines a certain aspect.

Half an hour into it, the film becomes documentary-like–with long sequences of rickshaws pulled by a truck, the camera taking a three-sixty-degree view of a rickshaw pullers’ demonstration or Melu monotonously eating his dinner. These are almost often disrupted by sounds- the bulldozer breaking down the house, a train chugging past, a tailor sewing clothes in his shop, a Punjab Roadways bus sputtering or the screeching noise of metallic blades being sharpened. The usage of sound is anti-musical at crucial points in the film. It’s intent is not to create harmony but disruption, a dissonance that plays throughout the film. The cinematography is outstanding. The emotive power of the film, as it approaches the end is overwhelming as the elements come together and soak the viewer in the life and experiences of the marginalized family.

The film has won many international prizes. It has also won the best director’s award for the young Gurvinder Singh and the  best cinematographer (Satya Raj Nagpaul) at the Indian National Film Awards.

from A Reader’s Words