Delhi may never become a major film hub, but it will certainly attract more and more filmmakers to come and shoot here despite the bureaucratic problems that they face in getting clearances and the multiplicity of authority.

While no consensus emerged even on the second day on whether Delhi would be India’s next film city, participants at a Global Summit during the 12th Osian’s Cinefan Festival of Asian and Arab Cinema said the Central and state governments could take steps to make it easy for filmmakers. The demand for a single window clearance system cropped up again and again.

Delhi Chief Secretary P K Tripathi said on the second and concluding day of the meet that Delhi had immense diversity and the future lay in developing the service and knowledge industry in the capital.

Though Delhi has the metro and historical monuments, he admitted that the Government did not have a policy yet for permitting shooting of films. But he pointed out that the Department of Tourism was preparing a booklet outlining all facilities available and a Film Facilitation Cell, and infrastructure would get built once filmmakers began producing their films here.

Eminent filmmaker Ramesh Sharma said a city needs an underbelly of provocative culture for it to become a film city, apart from creative and trained people. Delhi earlier had a film culture that was distinct from Mumbai, and that should be brought back. He wondered if Doordarshan could resume production of films and the National Film Development Corporation could chip in to help.

NFDC Managing Director Nina Lath Gupta said it was very difficult to shoot films in India, and the Archaeological Survey of India did not allow shooting after dusk in many buildings. Issues needed to be addressed with sensitivity to be build a facilitative environment.

Eminent cultural personality Muzaffar Ali who had earlier made ‘Umrao Jaan’ said the passion was lacking in the city since the people at the top did not understand the relevance of cinema as culture. He said the country as a whole lacked the sensitivity to cultivate a culture of good cinema by having script banks or a facilitative environment for Indian cinema to get global recognition. 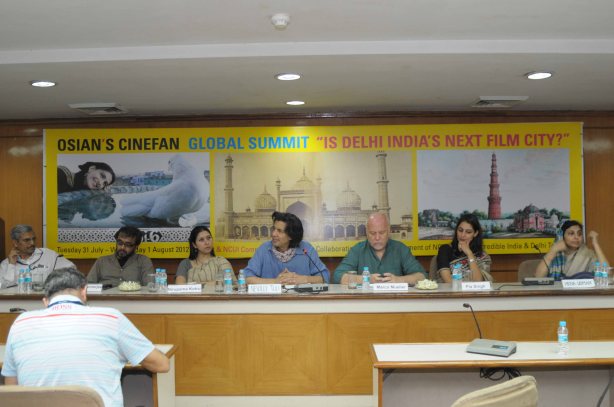 Anurradha Prasad of BAG Films said NOIDA had been conceived as a film city and many producers had brought prime land to develop studios, but these had gradually been given to news chanels. She said Delhi can become a hub for the new cinema that is developing in the country but the government has to step in with tax exemptions and infrastructure and reduce bureaucratic red-tape. She stressed the need for a Film Council which can also manage a single-window system.

Lawyer Nishith Desai said filmmakers coming to shoot in Delhi must be given rebates by the Government. He felt that an ecosystem has to be created if the city wants to lead. Venture funding will also have to be created.

Lyricist Prasoon Joshi said Mumbai had become a film city by luck, but Delhi could be made a film city by design. But he agreed with others that pop culture and a cultural underbelly were missing in Delhi.

Eminent filmmaker and jury member Marco Mueller felt that India had the potential to develop into a major market and wanted an event to be devised where Indian and foreign filmmakers could meet and interact. He also referred to the need for promotion of films and gave the instance of ‘My Name is Khan’ which had been promoted very well overseas.

Others who spoke pointed out that Delhi had a representation of every state, which could be utilized to develop a film infrastructure.

Osian’s Chairman Neville Tuli reiterated his view that Delhi should become a rich cultural hub where cinema can also flourish, and not necessarily become a film city. But he felt that financially Delhi also had enough people to invest in films. Delhiites absorb the best of cinema and therefore there is need to create a cinematic culture. He also felt that Delhi had infrastructure that was largely under-utilized and this attitude needs to change.

He wanted cinema to develop like an umbrella, bringing out the best in all art forms. Neville also stressed the need for a talent pool and this could be done through partnerships between the government and the private sector.