Chandigarh based Vijendra Trighatia is a film buff and writes extensively on cinema.

It takes a brave man to attempt to make features on issues which are sore points with a nation and where much could be argued for and against. It’s a given that where the issue per se is concerned the movie maker will rarely be able to make everyone happy, so the next best thing is to portray it in the most dramatic way possible. It’s easier to make movies on terror where Pakistan is the adversary since every one can readily identify the enemy. But what happens when the enemy is within? The boundaries between the perceived right and wrong get increasingly blurred as emotions will get invariably involved. Excesses occur on both sides and more often than not the sight of the original issue gets lost. The aggressor and the defender exist on both sides and each carries the sword of conviction which more often than not obliterates the defenseless and the ordinary individual. Violent cataclysmic changes in the existing order have had a long presence in the history of mankind but do not find favor in the post industrialized modern world. Hence no matter what the initial justification, all agents of change wrought through violence will have to face the wrath of the state. After a decade of bloodletting in Punjab, the nation faces its most serious challenge from the Maoists. 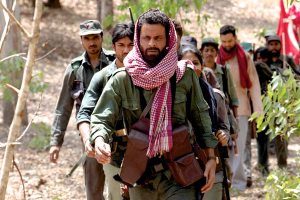 Although it fails as a telling commentary on a boiling issue but as a simple celluloid narrative of a series of events in the zone of conflict, the movie is racy and riveting and acquits itself pretty well. The story is loosely based upon a series of true events, as is claimed in the beginning but there is an obvious bias against the state where all politicians and businessmen are supposedly crooks and scoundrels. With the exception of the conscientious SSP, the policemen too are either spineless or a little better than criminals which I thought was a wee bit caricaturized. Even the DGP of the state police is portrayed more like a junior flunky. These guys are in a dire need of a lesson in conduct from the current chief of Punjab Police. However the SSP, creditably played by Arjun Rampal, redeems the image of the police by a professional approach to his job despite the fact that he frequently tries to shoot the entire MCC cadre all by himself and more than once tries to engage the enemy by charging in a huge group reminiscent of the Charge of The Light Brigade and rendering themselves as sitting ducks. The intelligence on the movement of the enemy is confirmed by a profoundly searching question “Khabar pakki hai?”. No wonder our boys in khaki keep getting knocked off at sickeningly frequent intervals. 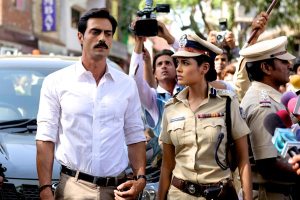 Since the movie is based on the Maoist movement it is but natural that they be shown in a kinder and romanticized light. So you have a western educated ideologue in a kurta pajama, sentimental revolutionaries and wronged women all of whom exchange the red salute at the drop of the hat. Thrown in for a good measure is a profiteer among their ranks who meets with a predictable end. The focal point of the plot is the Trojan thrown in by the SSP who decides to switch loyalties after his lover to be is arrested. It’s a powerful combo and it works for the movie.

Despite the forgettable music I had no problem with the entertainment factor of the movie. You will enjoy all the action which is ridiculous at times but then Hindi movies are known for that. But by adding a song on the exploitation by big business houses and mouthing a soliloquy at the end of the movie why try and pontificate when you really have no position on the issue? Leave it open ended and let the viewer figure it out.

One reply to “Chakravyuh: The Circle of Confusion”