Anirban Ghatak is a Research Scholar in IIT Bombay. He blogs at http://aghatak.wordpress.com.

Recently a short film got a huge number of shares in Facebook and many thousand views in YouTube. It is a largish short film by Anurag Kashyap, titled That day after Everyday. It seems that film deals with the issue of gender inequality, misogyny, rape, eve-teasing in our society.

Frankly speaking, if this is the level of consciousness of one of the supposed high-level artist intellectual in India, this country has really a LONG way to go before it can even think of gender equilibrium in the society.

I started out writing this review (rant?) having in mind a lot of things to point out in that film which spoiled initially 21 minutes and then the whole morning of mine, but eventually after writing a few words, it all seems so pointless. 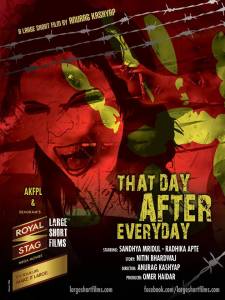 How can such a naive reductionist approach can even be criticised? Okay let me start by pointing out what is shown in this film:

The moral of this story could have very well been “If you want your husband to make tea for you, go learn some martial arts”. But it tries something else. And that is precisely my problem.

This film, under the facade of being an “intellectual” film which carries some “noble message” to the girls about how to fight the “men” in the society, never even cares to address that none of those three womens’ fight was against the men of their house, or their area or their office or in the bus. This very way of reducing the complex and historical problem of gender inequality and misogyny is one of the main tools of continuing this inequality forever. Once you reduce this problem to the problem of “security” and “vulnerability” and you solve it by “physical empowerment”, essentially that leads to even more vulnerability of those who are not enough “physically empowered”, regardless of their gender identity. This, eventually strengthens the very idea of physical inequality between men and women which is one of the main publicly available tools to subjugate women from the time of modern scientific progress and may be even before. When one reduces the problem of gender hegemony to the problem of protection, it assumes that someone weak needs to be “protected” from someone strong, and thus conforms to the notion of female as the “second sex”.

Anurag Kashyap is no different. But that is not problematic. Not everyone needs to be different. The problem is, Anurag Kashyap is dangerous! If one so popular filmmaker, in a film obsessed country, wears the mask of an egalitarian emancipated intellectual and consciously or unconsciously propagates such contorted notion of female identity to actually pushing further the gender divide, how are we, the common man are to perceive the dreamt equilibrium of gender and strive towards it? I am worried, though I am thankful to the fact that Anurag Kashyap is still an unheard name for more than half of the country’s population.

Ramchandra Guha writes in his book Patriots and Partisans: “One reason that Hindutva has been so successful is that it speaks in different voices. Arun Jaitley can be trotted out to calm the liberals; Narendra Modi to appeal to the hardliners…”, and this is what we are seeing in the Indian film industry time and again. We have people like Rohit Shetty to please the ones who like misogynist one liners covered with the name of comedy, Ekta Kapoor for those who like to see women busy fighting within themselves over the right of the kitchen and the temple, Aamir Khan for those who lean towards being “socially conscious” with a dash of jingoism and of course no female lead character, and Anurag Kashyap for those who are all out “socially conscious” and have a visible constant effort to find the loopholes in the society, crib about it, and stop after they see Anurag’s movie, thinking that someone is out there, doing what they wanted to do but could not due to several social constraints. And they all do same thing. Reduce the problem in a way you want, give a naive solution which in the first place can never be achieved and if achieved will make no difference, but in the meantime, you feel happy thinking that you are actually doing something to eliminate the gender bias in your society, and thus, now you can concentrate on something else as this problem is almost solved.

P.S. In case one is interested to spoil their 20 minutes of time, see the film:

2 replies to “Anurag Kashyap’s That Day After Everyday: A Dangerous Proposition”