Awadhesh Kumar Jha is a Research Scholar at Centre for Historical Studies, School of Social Sciences, Jawaharlal Nehru University, New Delhi. He can be reached at awadhesh4jnu[at]gmail.com.

The period of 1970s witnessed a movement among the scholars of social sciences and humanities to make culture as the basis for social debates. It led to the development of ‘new social history’ which facilitated en route for the studies of memories. With the ‘cultural turn’ historians have increasingly accepted that the authors and subjects of the primary source material construe the world through a web of thoughts and opinion- articulated in ideologically charged language. The formations of the past that the historians arrange suddenly seemed rather self-evident. In this vision neither historians, nor historical agents were ‘value free’. This new kind of self-awareness represented a profound shift in the methodological and epistemological bedrock of the historical discipline. To historicize memory, then, is not just a question of tracing changes and continuities in mnemonic and commemorative activities over time, but to ask- how forms of ‘remembering’ themselves may be time bound cultural constructs. This volume deals with the vibrant concept of ‘memory’ which has become familiar category in the academic history. The most distinguishing feature of this book is its methodology. Here in this book authors offers their original research through an explanation of what they are doing with their primary material and a reflection on the difficulties of working with it and their focus on sources.

Authors have approached memory not just as source but as a subject. Transversely this volume has oral testimony generated through the interviews performed by the historians, legal testimony given by the witness in the courtrooms, inscriptions on the ancient monuments, work of art, photography, and letters written by war veterans, autobiographical fictions etc. There is a broad chronological sweep; the case studies include moments between fifth century BCE and the twenty-first century CE. To reflect this diversity of engagement with memory as source and subject across the discipline the book is divided into three distinct parts. Part I offers a discussion on trajectory of oral history getting transmitted into the written history. Part II is focused squarely on social acts of memorialisation and commemoration. Part III proposes to interrogate the interplay between these two types of ‘memory at work’. They linger on the problem of ‘collective memory’. The common interest in the volume is about how certain stories of the past become the dominant one. And how the dominant stories may inform or be informed by the individual action. Throughout the book careful attention is paid not only to the political and social but also institutional context in which the chosen source material was generated and consumed. 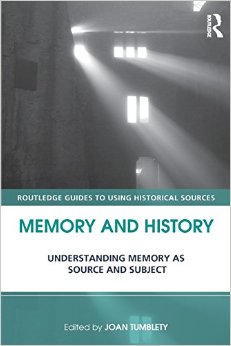 The chapters in this volume do not resolve the quandary of collective history i.e. what it is? How it functions, where it stands in relation to individual memory and how certain stories of the past become the dominant one completely. They do so partially and in different ways. The problematic notion of collective memory- the notion of a shared sense of the past that is shaped, filtered and selected by actors in the present – haunts all three parts of the book. It becomes clear that even for the oral historian whose source material derives almost exclusively from the testimony of individuals, an engagement with wider ‘cultural scripts’ about the meaning of the past is inevitable, especially in Lindsey Dodd’s essay (chapter 2). It is precisely these ‘cultural scripts that furnish the source material in good number of the chapters. Another common theme is that of the affective power of various mediums of memory. What they agree on the ability of the lived experiences in the past.

Two of the chapters are particularly attuned to the power of the visual culture where acts of memorialisation are concerned. Franziska Seraphim, in her chapters on Japanese art (Chapter 5) suggests that ‘we see with memory’ that the visual representation of the past perhaps pack a greater emotional punch than the written ones. Raphael Samuel, for example, reminds his readers of the key role played by the sight in the mnemonic practices of the Ancient, Medieval and Renaissance worlds studied by Frances Yates, which in his words ‘put the visual first’ by linking the ideas to the images and not to the words. Susan A Crane recognises in her chapter (chapter 7) the power of photographs in the museums for ‘staging a visual argument’, not least through their supposed ability to represent past reality more authentically than any other medium of exhibition.

Another theme cuts across the volume is the materiality. Memory is often lodged as object. (chapter1). Susan M Stabile (chapter 11) lingers on materiality not only of memory but of History. Poly Low too (chapter 4) considers the importance of the material when she examines the interactions between oral, written record and materiality in the commemorative life of inscribed monuments in classical Athens. Interviewing of family identity with local industry there, that lay at the heart of the profound misremembering discussed by Lindsey Dodd (chapter 2). Hannah Ewence (chapter 9) minority authors of autobiographical fiction negotiate personal and national identity, as well as personal and national pasts, through the real and imagined place of suburbia.

An additional link across the chapters is the theme of marginality, the mentally ill, migrants, ethnic minorities appear as ‘subalterns’, whose individual recollections intercede and are mediated by wider ‘cultural scripts’ about the past, as in the case studies by Jason Crouthamel (chapter 8), Tony Kushner (chapter 10) , Michal Bosworth (chapter1) and Hannah Ewence (chapter 9). In addition the problem of trauma is encountered in each part of the book, explored by Rosanne Kennedy (chapter 3) in relation to the witness testimony in the court room, by Franziska Seraphim (chapter 5) in relation to the artistic responses to the atrocities of war, and by Jason Crouthamel (chapter 8) in relation to the war veterans. The theme of law as a shaper of memory and counter memory is there in Kennedy and Crouthamels studies too, but also in Joan Tumblety’s chapter (chapter 6) on the centrality of purge trials as a vehicle for establishing memorial cultures in post-Liberation France. Susan A Crane (chapter 7) addresses head on the power of museal display to craft subtle narratives about the meaning of the past through images. The potential of curators to shape and reshape the meaning of the artefacts in this way is also picked up by Susan M Stabile (chapter11) when she suggests that an antiquarian understanding of the value of material is passed to modern museum, its constituent parts reclassified and rearranged. Both see that museums can influence the reception of historical artefacts in ways that have an impact on popular understanding of the past, for better or worse.  Tony Kushner (chapter 10) strikes a similar critical note when he notes how museum sometimes unwittingly reproduce the double silence of the archive and contemporary political debate when presenting immigration in modern Britain. But, as Stabile’s concluding evocation of her own experience of handling subjects – there are limits to the museums power to fix the meaning of its display. In relation to the use of photographs in the museums, Susan A Crane puts the subjective self at the centre stage by reminding us that ‘each viewer will see the image through a personal lens pregnant with multiple memories, knowledge and experience’. Here Oral historians may be able to play positive role in facilitating the memory work of the communities whose grievances have not yet been heard.

The chapters in the first part of the book deal with oral testimony as source material, whether generated through interviews with the historian or in a judicial context. The first two of them- by Michal Bosworth and Lindsey Dodd- describe in practical detail the experience of interviewing people, especially women, about their past lives. Both the author put themselves in the frame, acknowledging how their presence and approach to questioning. This part emphasises on the psychological dimension of remembering. The chapters in Part two of the book deals with the questions of memorialisation and commemoration and they focus on the sources other than oral testimony. They move beyond the remembrances of individuals to consider how the actions shared among the wider social groups, often on a national scale. In this part the authors focuses on the political dimensions. The authors in the final chapters revolve around different ways on intersections of autobiographical memory and social or collective memory. In this section emphasis is on how individuals have played with or tried to shape stories about the past that have enveloped them.

Layout of the volume is thematic and based on case studies drawing on examples from Europe the United States, Japan and Australia. Though the chapters in this volume does not provide last word on the study of memory as source or object but, various themes and approaches can help especially the students to enhance their appetite for this concept by dealing with the questions like whose memory does the source attest? Who are the authors and how are they situated institutionally, socially, politically and culturally etc. This book is tour de force of fine scholarship and sensitivity. Depending upon readers’ predilections, empirical nature of the book might be appealing to some, at the same time the missing theoretical connections may not motivate others to take up the book.