Noreen Sadik is an American of Palestinian origin. She is a freelancer for various publications. 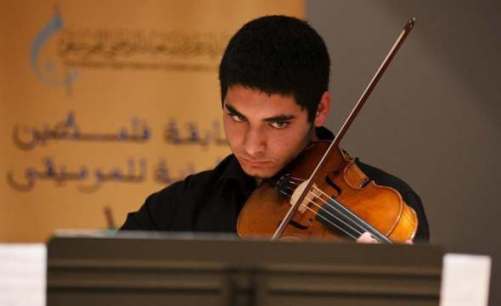 I announce it loudly: I, Omar Zahr Eldin Mohammad Saad, will not be the fuel to the fire of your war, and will not be a soldier in your army.’

Omar Saad is a musician; he plays the viola. He is from the Arab village of al-Mughar in northern Israel and belongs to the Druze religious minority. As a musician, Omar uses his art as a means of creating peace and bringing joy to people. As a citizen of Israel, he is now required by law to serve in the Israeli army, something which he feels goes against his core, both as a human being and as a Palestinian.

Today, on 31 October 2012, Omar is due to appear for his military recruitment test but he is refusing to go.

In a letter to Israeli Prime Minister Benjamin Netanyahu and Defense Minister Ehud Barak, he clearly states his reasons for not adhering to the law that has been imposed on the Palestinian Druze community since 1956. Omar is a victim of this  law; conscription is applied to Druze men, while Palestinian Muslims, Christians and Bedouin are exempt.

According to Samer Swaid, Secretary of the Druze Initiative Committee, Israel used various methods to separate and create mistrust between the Druze and the other Palestinian communities in Israel. The old Druze leaders were replaced with collaborators who silenced protestors, increased political and financial support was provided to Druze communities and they were classified on identification documents as Druze rather than Arab. Israel completed its mission, and succeeded in dividing a people.

Over the years, many Druze learned to believe that they and the Jews shared similar interests, which differed from other Palestinians. And as a result, the conscription of Druze men became a law.

However, there were those who secretly fought conscription. In 1958, the Free Druze Young People Organization, was formed and, although they were forced to work under the martial law which was imposed on Palestinians, they succeeded in bringing many young Druze to their side.

The Druze Initiative Committee, which works against conscription from a conscientious viewpoint, and provides support to those who refuse to serve in the military, was established in 1972.

The mood seems to be shifting among the Druze. A recent ‘national strength survey’ indicates that they are pulling away from Israeli nationalism. Studies conducted in 2010 by Professon Majid al-Haj of the University of Haifa show that two-thirds of Druze do not want to enlist in the Israeli army.

Those who refuse face severe punishment, and serve longer prison terms than other non-Druze refusers. Swaid says this is a way of instilling fear in young people so that they will feel forced to serve in the military duty.

Omar is one of many Druze who stand by their convictions and refuse to stand against their Palestinian brothers and sisters. And he is one of many who have faced or will face imprisonment as a punishment .